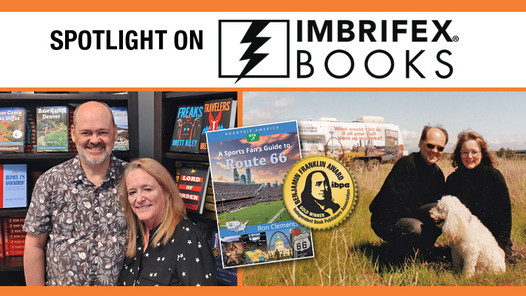 At this year’s IBPA Benjamin Franklin Awards, Imbrifex Books’ A Sports Fan’s Guide to Route 66 by Ron Clements nabbed two Golds. The win is not the first for Imbrifex Books which was founded in 2016 and has been an IBPA member for just as long, consistently winning awards through the years with IBPA. We spoke to Mark Sedenquist, who co-founded Imbrifex and its sister company RoadTripAmerica.com, with Megan Edwards.

IBPA: Hi Mark, congratulations to Imbrifex on winning double gold at this year’s IBPA Benjamin Franklin awards. We should also congratulate you for another book Blimey, I’m Knackered. An American’s Survival Guide to British English by Marshall Hall, that won a silver.

Please tell us about A Sports Fan’s Guide to Route 66. How did it land on your desk and went all the way to the IBPA Benjamin Franklin awards?

Mark Sedenquist: Lifelong sports fan and longtime sports journalist Ron Clements queried us about his manuscript for A Sports Fan’s Guide to Route 66. We were intrigued, because, amazingly enough, given all that’s been written about Route 66, there had never been a book that focused on all the sports venues and history along the iconic highway. We loved how thorough Ron had been in visiting and photographing all the venues and attractions, interviewing key people, and researching the history. His book adds amazing depth and dimension for anyone—especially sports fans, of course—traveling “The Mother Road.” (Read the rest of the article here…)

This site uses Akismet to reduce spam. Learn how your comment data is processed.