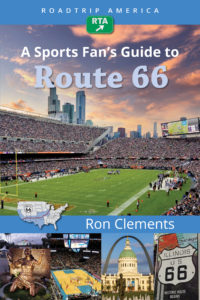 Get Your Balls, Bats, and Sticks on Route 66! A brand new book that highlights historic sports venues, storied sports professionals, and current sports events along the Mother Road.

"From its first pages, rambling through the streets of Chicago, then through the heartland of America, and on to the "End of the Trail" in Santa Monica, Ron takes you on a journey that explores the soul of sports and a nation. You cannot help but become engrossed in his tale, while also conjuring up your own memories from road trips you've taken. Ron includes everything you need to know — the places, the people, the history — and yes, even bars and inns. Kick back and get your kicks with Ron on his Sports Fan's Guide to Route 66".— Rich O'Malley, author, One Lucky Fan: From Bleachers to Box Seats, Chasing the Ultimate Sports Dream to Visit All 123 MLB, NBA, NFL & NHL Teams (06/25/2021)

"Each vignette is a gem, giving you a chance to learn about these locations, some well-known and others off the radar. The stories spin a rich fabric of American culture and one-of-a-kind personalities woven together by Route 66. This is a perfect book for the beach or your vacation. It’s also a great gift idea for your favorite sports fan.".—-Dave Nershi, Vino-sphere.com (07/05/2021)

"This is the ultimate Road Trip book for sports. I love the smaller-time teams that are highlighted like the Joliet Slammers and the bigger ones like the Cardinals and Busch Stadium.".—-Russ Cohen, Sportsology.com (08/01/2021)

"As a fan of both the American road and American sports, I’m happy that someone has skillfully expanded the Mother Road’s purview to include not just its dinosaur statues and burger stands, but also its Mickey Mantle Museums and high school gyms incubating greatness. Ray Nitschke and Mario Lemieux might have worn the number with pride, but Rt. 66 remains the original."--Mike Wilkins, coauthor, Roadside America, and co-owner, Pittsburgh Steelers. (03/13/2021)

"By blending Route 66 with a keen and tireless eye for sports history, Ron Clements has created a book that is so mind-bogglingly interesting, entertaining, and informative, that it makes you want to pack a bag and hit the road within the hour. For me, that's the mark of a great travel/history book; how fast it makes you want to hit the road. Exhaustive in scope and brimming with passion and detail, A Sports Fan's Guide to Route 66 is a home run, touchdown, goal, slam dunk - you get the idea - thoroughly wonderful."--Chris Epting, best-selling author of 30 travel/history books, including Roadside Baseball and Hello, It's Me, (03/13/2021)

“As someone who has traveled Route 66 many times, chronicling every bend and fork in the road, I was surprised to discover new insights thanks to Ron Clements. At first glance, it seems that A Sports Fan’s Guide to Route 66 is all about sports. And it is. But it’s also a thoughtful look at how sports unites communities, spotlighting those communities — big and small — that knit together the people and places of Route 66. Ron brings a unique perspective to one of the most epic roads in America. I love this book!”-–Jessica Dunham, author of Moon Route 66 Road Trip and The Open Road: 50 Best Road Trips in the USA, (04/06/2021)