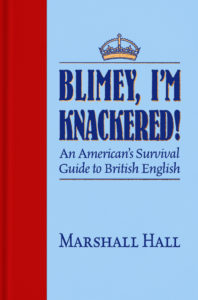 Back in 1887, Oscar Wilde wrote, “We have really everything in common with America nowadays, except, of course, language.” One would think, in a world homogenized by technology and social media, that differences between British English and American English would gradually disappear. Ask any recent traveler, though, and you’ll learn that plenty of linguistic idiosyncrasies persist, and new ones emerge all the time. Folks on both sides of the pond may be in closer touch than ever before, but we are still, as George Bernard Shaw purportedly noted, “two nations divided by a common language.”

Blimey, I’m Knackered! is the perfect companion for anyone desiring to bridge the gap between US and UK English or who simply enjoys the evolution of language and culture. American scholar and longtime UK resident Marshall Hall has organized his insightful definitions and explanations of British idioms, colloquialisms, abbreviations, acronyms, and slang into nineteen entertaining and revealing chapters covering everything from transportation and food to politics, education, and wardrobe. Making the book truly comprehensive are sections on pejoratives and “naughty bits.” Hall’s often amusing explanations make the book an engaging read for language lovers and travelers alike. Charming pen-and-ink illustrations by Mark Cowie add whimsy and humor to this entertaining, useful, and unique compendium. No American need ever be befuddled again! 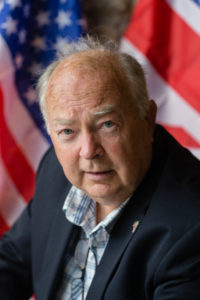 A professor of socio-anthropology with a lifelong interest in travel and linguistics, Marshall Hall began life on an Ohio farm. He moved from the University of Cincinnati to teach at the American College in London. 33 years later, he still calls the UK home. He is married to an English woman, has UK citizenship, and lives in Chesham, Buckinghamshire, just outside central London.

Blimey, I’m Knackered! An American’s Survival Guide to British English will be in bookstores, online and wherever fine books are sold on August 31, 2021.

The architecture of the UK is the result of a multitude of influences, including cultural values, expediency, local building materials, urban density, and available expertise. Visitors to Edinburgh, as an example, will no doubt notice architectural styles, building materials, and urban layouts that are distinctly different from the red brick and Portland stone of London. The countryside has its own historic and often very practical styles that include thatched roofs that are newly installed and maintained even today.

The population booms of the Victorian and post-World War II eras called for new ways of thinking about and constructing housing for the masses. In the late nineteenth century, this resulted in excessively long terraces of houses sharing common dividing walls with “two up-two down” room layouts and an outdoor toilet. From the 1950s to the 1970s, the Victorian terraced houses were seen as slums, and many were cleared away to make room for the new and modern high-rise tower blocks, which have themselves started to be cleared away for the next wave of high-density housing. Both have enjoyed a regeneration in recent decades as demonstrated by the protective historical listing given to several of the high-rise tower blocks and seen in the gentrification of the London Docklands and other London, Manchester, Glasgow, and many other city neighborhoods.

For practical reasons, houses in the UK are not built of wood. It’s just too damp, and clay tiles are the roofing material of almost all housing. Residential interiors also reflect a unique value and class system that Americans might find it difficult to understand. In many rural communities, toilets only started moving indoors in the last hundred years, central heating is a modern luxury, and mixer valves for the baths and sinks are still sometimes difficult to find.

BACK-TO-BACK HOUSE
A back-to-back shares three walls with other properties (the back wall and both sides), so the door and windows are on the front of the house. The typical back-to-back house had a living room and kitchen on the ground floor, a bedroom on the first and attic floors, plus a basement. It was renowned for squalor, disease, and poverty due to the cramped design and poor sanitation. In the eighteenth and nineteenth centuries, mill and mine owners of the Midlands and northern England built mile upon mile of them to cram the maximum number of workers into the minimum space at the lowest possible cost. Few back-to-back houses have survived besides some in the West Yorkshire cities of Leeds and Bradford. Elsewhere, the National Trust has saved a small number, including six in Birmingham out of the original sixty thousand in that city.

BLOCK OF FLATS
An apartment building.

BUNGALOW
A smallish (by American standards) single-story fully detached house. The word is derived from the Hindustani word “bangala,” meaning “belonging to Bengal,” in reference to the type of houses built by early European settlers. (The folk etymology that claims the word is derived from “build four short walls, and ‘bung a low’ roof on it” is unsubstantiated.) The bungalow became popular as an architectural style in the late nineteenth century.

COAL HOLE
An interesting bit of history. As you walk along the streets of any large English city, look down at the sidewalk (pavement), and you will see small steel discs approximately fifteen inches in diameter. They cover holes through which the coal merchant could deliver coal to the basement of a townhouse without needing entry. These holes were known as “coal holes.” Some older coal hole covers are quite intricate and collectible, while many of the modern ones are just plain. Coal holes were rendered obsolete in the 1950s with the introduction of gas heating systems and legislation requiring smokeless fuel.

PARADE OF SHOPS
Also widely referred to as a “shopping parade,” this is a row of assorted stores (e.g., newsstand, butcher, grocer, fast food outlet, bookie, thrift store), usually in a residential part of town. If someone says, “I’m off to the shops,” it’s safe to assume they mean the local parade. This is different from a “strip mall” in the USA. What Americans call a “strip mall” is known as a “retail outlet” in the UK.

ALL FUR COAT AND NO KNICKERS
Referring to a woman who looks good on the surface but has no substance.

ARGY-BARGY
A big deal, usually an emotional crisis, a lively discussion or dispute, an argument or quarrel. “There was a bit of argy-bargy between the two of them, but they shook hands later.” Some argue that “argy” is a modification of the word “argue.”

AT HER MAJESTY’S PLEASURE
Being locked up in prison for life.