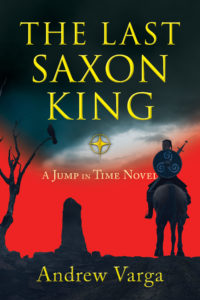 One Jump to Save All Time

Life is progressing normally for sixteen-year-old Dan Renfrew when he accidentally transports himself to England in the year 1066. He soon realizes that he’s trapped there, and that’s not his only astonishing discovery. Dan learns that he’s descended from a long line of time jumpers—secret heroes who travel to the past and resolve glitches in the time stream that threaten to alter subsequent history. The only way Dan can return home is to set history back on its proper course in the Anglo-Saxon age. This is no easy task. A Viking horde is ravaging England in the north while a Norman army threatens to invade from the south. In between and desperately struggling to hold on to his throne is Harold Godwinson, the newly-crowned English king. Dan is fighting to ensure that events play out correctly when he finds himself plunged into an even more lethal conflict. To save history, Dan must battle a band of malevolent time jumpers whose lust for wealth and power threatens the entire future of the world.

The Last Saxon King will be available, online and wherever fine books are sold, on March 7, 2023. 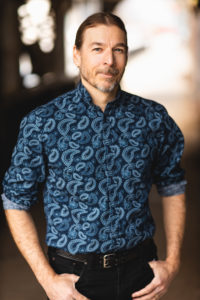 Ever since his mother told him he was descended from Vikings, Andrew Varga has had a fascination for history. He’s read hundreds of history books, watched countless historical movies, and earned a BA with honors from the University of Toronto with a specialist in history and a major in English.

Andrew has traveled extensively across Europe, where he toured some of the most famous castles, museums, and historical sites that Europe has to offer. During his travels he accumulated a collection of swords, shields, and other medieval weapons that now adorn his personal library. He is skilled in fencing and Kendo—the Japanese art of sword fighting. He has also used both longbows and crossbows, built a miniature working trebuchet, knit his own shirt of chain mail, and earned a black belt in karate.

Andrew currently lives in the greater Toronto area with his wife Pam, their three children, and their mini-zoo of two dogs, two cats, a turtle, and some fish. It was his children’s love of reading, particularly historical and fantasy stories, that inspired Andrew to write this series. In his spare time, when he isn’t writing or editing, Andrew reads history books, jams on guitar, or plays beach volleyball.

“For fans of alternative history/ historical fiction and time travel. As an adult who enjoys YA, this was a fun read. As a mom with a houseful of boys, this was a terrific find. It’s a more grown up version of Haddix’s time travel series and all around better than Harry Turtledove’s Cross Time Traffic series…This book features professional level writing, good editing, strong plots, and well developed characters. It is suitable for ages 13+. I stayed up to finish this book. I can’t wait to read the whole series. I will be buying these for my boys.”–Kathryn Lichtenfels, NetGalley (05/13/2022) Five Stars

“This was an interesting story in the sense that the protagonist essentially had to adapt to an alien environment that at the same time is so familiar to us. In addition, while the author allowed some amount of modern politics into the book, the book was refreshingly apolitical compared to most major young adult novels being released now. Also as a history enthusiast and one who sees the misrepresentation of the period daily, it was pleasant to read a novel with a primarily accurate representation of the times (discounting time travel aspects and “time glitches” plot devices). I would recommend this book to fans of adventure, time travel, coming of age, historical fiction, and high fantasy.”–Yvue Field, NetGalley (05/24/2022) Five Stars

“My favorite way to study history is via alternative histories. The author has done an amazing job in researching the era into which he “drops” his character. Our homeschooled protagonist shows how his dad/teacher has prepared him as he works through numerous precarious and interesting adventures.”–Doug Yonce, NetGalley (05/23/2022) Five Stars

“Be still my beating heart, this book was phenomenal!…This may be the first YA novel I’ve read that is accurate down to the language, lifestyle, buildings, food, and hierarchies. I cannot wait to read the rest of the series and find out what happens! Young adult readers will learn so much about this period and in a way that allows them to understand and identify with the characters.”–Cassandra Smith, NetGalley (05/09/2022) Five Stars

“I’m hooked! Want to binge-read the entire series of 7 books in total. But only this one has been released yet…must find a time jump device! The author doesn’t keep you waiting long for action, twists and turns to start happening. After the introduction of the main character the story takes you on an adventure! Second book in the series will be released in September. I can’t wait! Is it September yet?”–Petra Bulthouse, NetGalley (05/21/2022) Five Stars

“If you’ve ever fantastized about jumping back in history, you’ll enjoy this story.”–Sheila Lynn, NetGalley (05/12/2022) Five Stars

“The Last Saxon King is a marvelous time-jumping novel that follows the story of Dan, a teenage boy of current times, who finds himself in the year 1066 AD…It’s one unforgettable and enjoyable journey! “–Laur VanPatter, NetGalley (05/11/2022) Five Stars